When someone usually thinks about a woman’s body after they have a baby it generally isn’t the most appealing image. I had no idea what to expect.

Would my belly button look like a baboon’s ass?

Will my boobs need cranes to hold them up once I stopped breastfeeding?

Would I ever fit into my old clothes again?

Will I always pee when I sneeze?

Leading up to the birth I was more concerned with dealing with labour and Harper being ok rather than worrying about bouncing back. However, there were many times of frustration with how uncomfortable I was and also excitement to finally being able to see my ‘hoo-ha’ again.  Throughout my pregnancy I had gained over 16kgs most of which I gained in the first 12 weeks (probably due to the fact I could only stomach bread).  I made Ryan hide the scales as I found myself stressing over something I can’t control. Ditching the scales was the best thing I ever did when I was pregnant.

Throughout my pregnancy I used coconut oil once a day to help with my skin stretching. I already had a few stretch marks just from growing up, I was fortunate enough to only get 2 small marks on my hips which have now disappeared. Stretch marks was definitely something that originally scared me but after a couple of months I started to see other womens marks as badges of honour and strength. So the thought of getting them didn’t worry me so much after a while and honestly everyone has them anyways!

I have exercised consistency over the last 6 years and I continued throughout my pregnancy until I pretty much couldn’t fit through the gym door anymore (or when I got sick of pissing in between sets). At about 36 weeks onwards I started swimming at the local pool as it made exercising a lot easier on me. It made me feel weightless and helped cool me down during the warmer days (yes I’m the idiot who got pregnant in summer). So in my mind as long as I ate well and kept active (that was safe for me and baby) then my body will just be how it is supposed to be.

Once Harper was born I was on such a high and that feeling of heaviness went right away! Of course I was still least 12kgs heavier than before but I was so used to not being able to move I felt so much better instantly (not to mention how amazing it felt sleeping in whatever position I wanted!). A couple of weeks after birth I still looked like I was 5 months pregnant. It takes time for everything that took 9 months to move to go back in its place. SO don’t expect to have a baby and your belly to look like it did before. The amount of you that changes and moves around on the inside is incredible so it will take TIME.

Two weeks postpartum I started taking Harper for walks (mostly because being stuck in that house was driving me INSANE). I felt like going out and just being outside helped so much. I was worried I was getting PND (especially with my anxiety). But soon as I started walking daily I started to feel like myself again I think I had a serious case of cabin fever!

I dropped about 11kg since the birth and still had about 7kg to loose but I have always tried to not focus on the scales. The physio did a check on me and made sure I didn’t have any diastasis recti (ab separation).  It appeared that my abdominal muscles had returned to normal which completely shocked me considering how huge my belly got.  The physio then gave me some exercises to help strengthen my core. It is VERY important for women to get guidance and clearance from your physio and doctor before you start doing any exercise! You can do a lot of damage if you start doing exercises when your body is not ready!

The doctor gave me early clearance because my body was healing nicely. Along with my history of consistent training he felt comfortable letting me start exercise. I slowly eased into it with one workout a week then went to 2-3 once I felt ready. I couldn’t believe how sore I was!! Having a baby left me with NO core strength so I found a lot of exercises I had done previously a lot more difficult.
I always made sure I was eating enough food as I was breastfeeding at the time and didn’t want my milk supply to drop. I struggled with my milk supply a couple weeks post birth as the hospital left some retained placenta inside me. Which messed with my supply so I made the decision to take medication for a while to increase my milk even though a side effect was weight gain. However I didn’t care about how I looked as long as Harper was being fed (unfortunately I had to stop taking the tablets and cease breastfeeding after a few months due to other bad side effects).

I had no intentions of using the gym crèche until Harper was older so I started doing my own home workouts. At home I had few dumbbells, a step and some medicine balls which I used to create workouts along with my own bodyweight. When Harper was napping I would exercise or I’d pop her in the swing and she’d just watch (probably thinking what the fuck mum). Once I felt comfortable and not so zombie-like I started going to the gym twice a week. I know a lot of women can be afraid to go back to the gym after having a baby; worrying what people will think. You know what they are really thinking?? Good on you for being active!

Before I was pregnant I would meal prep most weeks to keep my foods healthy and it made life a lot easier.  I made snacks for the week such as protein balls or my homemade museli bars and then my lunches. Obviously as a new mum you can be really strapped for time so being organized will really help. Unprocessed wholesome foods are the only things I eat and it makes a huge difference! The only processed things I eat is protein powder and yogurt or the occasional treats!
I didn’t put any pressure on myself to look a certain way but I thoroughly enjoy training and I love my healthy recipes so it started to pay off.  At 4 months postpartum my gym had an “8 Week Challenge” on and Ryan and I decided to do it.  The challenge really helped give me that extra push to finally start using the gym creche.  Leaving Harper in the creche initially made me so anxious but I forced myself to relax.  It only took a couple of visits until she settled and the children in there love her. I started training 5-6 days a week again and focused on getting my fitness back rather than thinking of weightloss. Before I knew it I was back to my pre-baby weight by 6 months postpartum.

Goals
Since Harper was a couple of weeks old I would write down little goals for myself each week. In the beginning it was as simple as go for 2 walks this week.  Then it turned into more specific goals as I started getting some sleep and routine.

Measurements and fitness goals are what really gave me extra motivation. Some of my goals were:

I ended up winning the “8 Week Challenge” and received $500 prize money!!

ITS ALL ABOUT PERSPECTIVE!

So postpartum mammas try not to focus on how far you have to go or how unfit you are. Enjoy the journey and embrace it as a LIFESTYLE not a quick fix! Sure there were times I felt as if I had gone backwards in terms of fitness and my body. But I’d look down at my baby and remember how much BETTER my life is with her in it. I would choose that over a 6-pack any day!

Embrace your INCREDIBLE body that created another human life! Who gives a shit if you have saggy boobs (I know I do but its called a pushup bra) or you piss yourself when you run. If you change your perspective and lead a healthy lifestyle results will appear anyway! 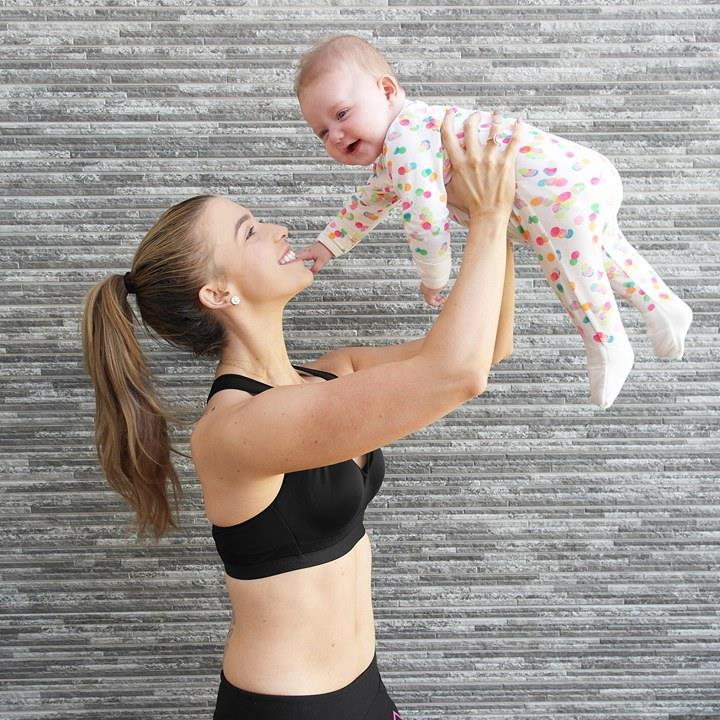 Keep an eye out in the coming months I will be sharing with you all some awesome home workouts!!!!

Its time to recharge our physical and mental batteries! This challenge is all about…

Why Weekly Goal Setting is Important