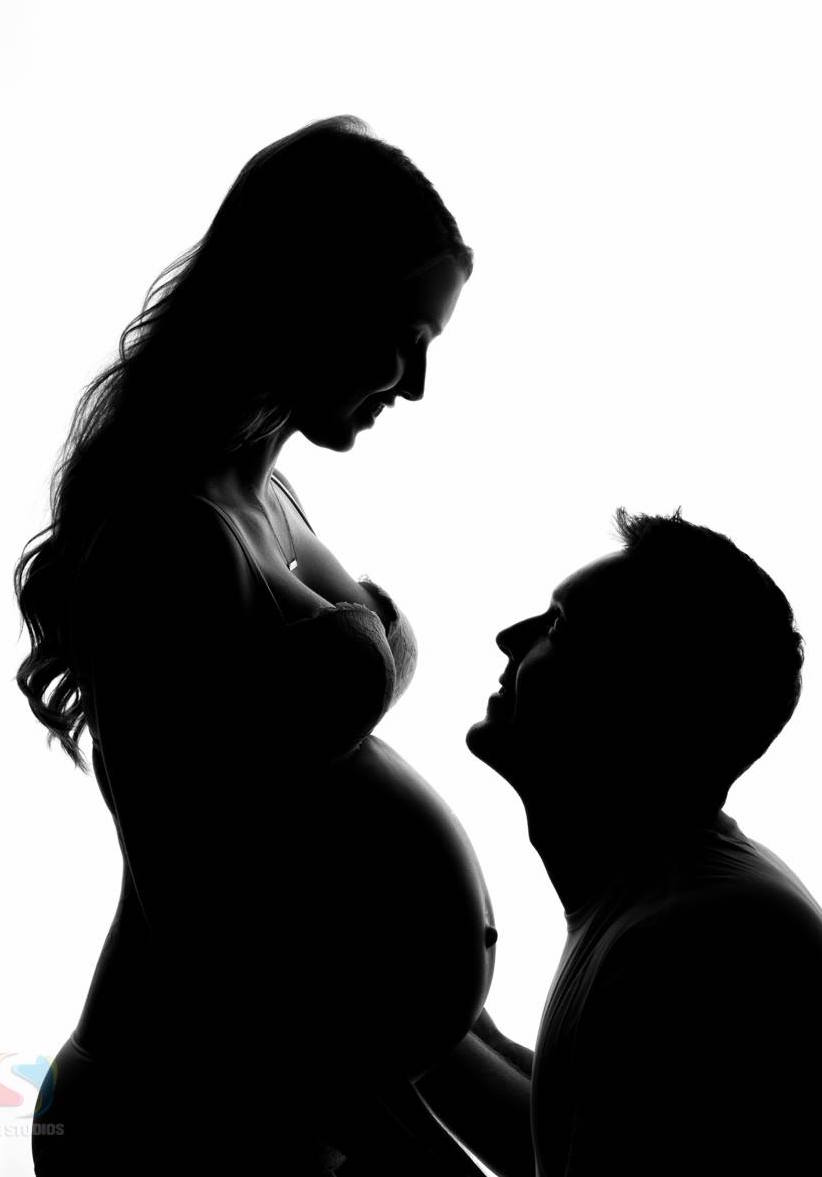 It happened within a blink of an eye; one minute you’re pregnant the next you’re a mother. After I gave birth to Little H I couldn’t stop staring at her in disbelief that she was FINALLY here. I felt like I was pregnant forever and this day would never come. I was on such a high and had the biggest adrenaline rush, she was my little pink miracle.

The midwife let us spend a few hours in the birthing ward after Little H was born and we just couldn’t stop looking at her all wrapped up with her beautiful face poking out. Little H was 51cm and 3.34kgs and absolute perfection. It was amazing to think this whole time it was her that was kicking the shit out of me and head-butting my vajayjay. It took a while to get stitched up then I just looked around the room (which we somehow made a total mess) and thought to myself “I did it!”. I felt sooo proud of Little H and myself for getting through it in one piece (I’m sure my vagina would say otherwise). 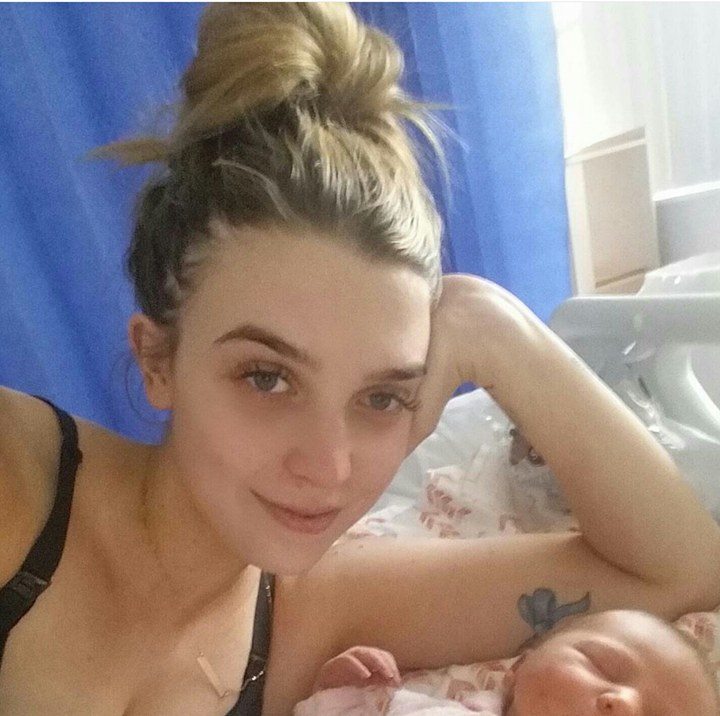 We made the phone calls to family and friends to let them know the good news. No one knew so they were all so excited and shocked. My parents, aunty and cousin came up a couple hours later and said that Ryan looked in worse shape than me (you’d think he had to push her out). I was literally bouncing off the walls with excitement to show off my girl. Then we were moved to the maternity ward where I shared a room with a young single mum. I really felt for her, I couldn’t imagine going through it without my husband.  Childbirth really makes a woman have zero shame; there I am waddling around the hospital, legs spread a metre apart, wearing a pad the size of a mattress, yet there I was grinning from ear to ear.
I was so surprised how confident I was with Little H soon as she popped out. Before her I was the awkward lady that would make babies cry when I held them. However I really was a natural mother, those instincts just kick in straight away. The midwives even thought she was my second baby, which made me feel really good. Ryan was disappointed he wasn’t allowed to stay overnight (a shitty hospital policy) so he left at around 11pm. I was just so wrapped up in bub I didn’t mind at all being alone with her. I was blessed with a shitload of colostrum so bub only fed every 4 hours (usually its 2) and she was so sleepy. Breastfeeding was so amazing, she had a great latch and I had more than enough for her. Every feed we did I felt like it was an accomplishment and made me very proud of Little H. 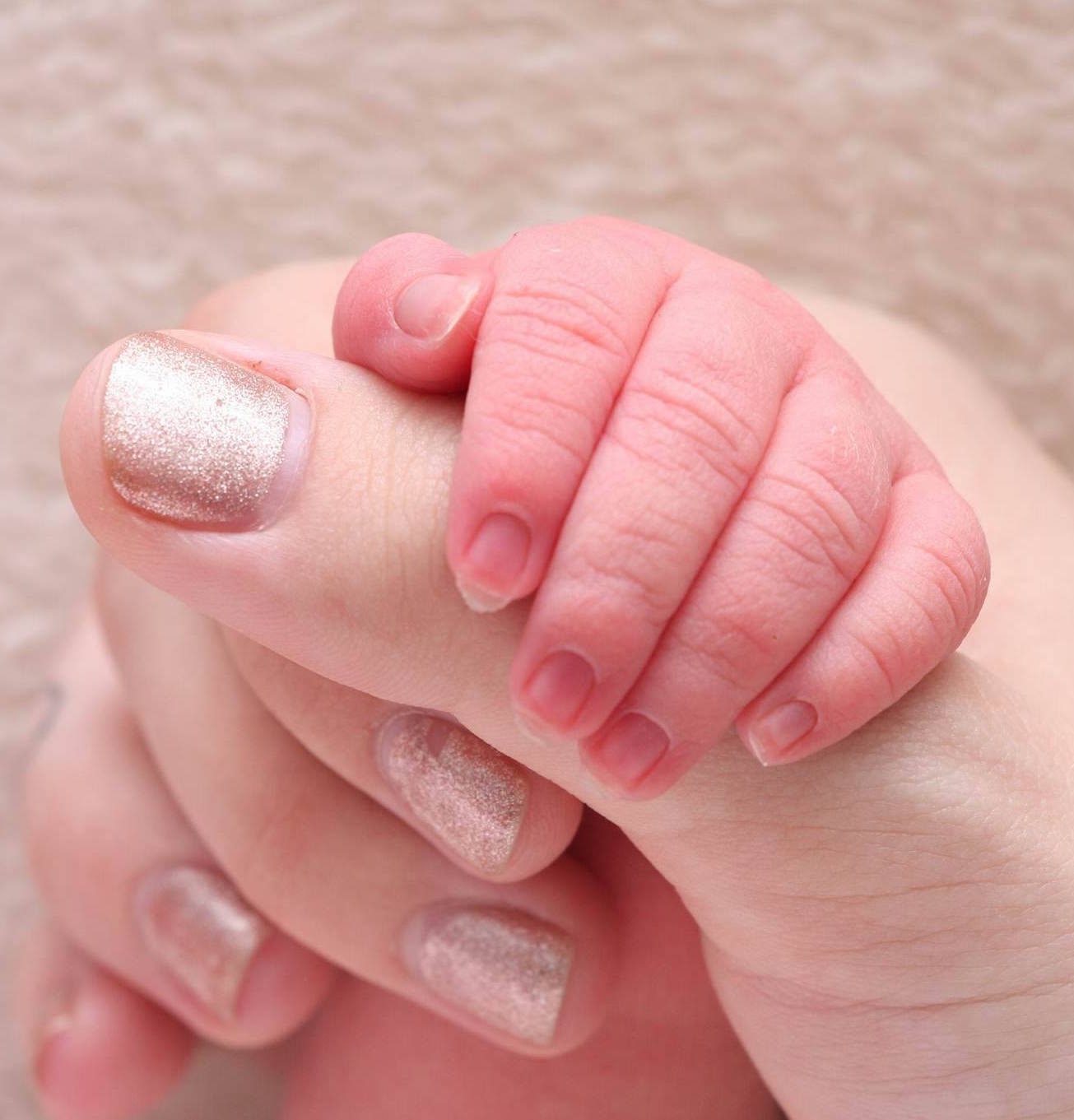 The next day Ryan was in soon as visiting hours started. I could tell he didn’t get much sleep he was just on too much of a high. I got 2 hours sleep because I was still buzzing and too paranoid to fall asleep as I wanted to make sure bub was still breathing every hour. The midwife was so lovely and offered to watch her for 2 hours so I could switch off and know she was safe.  So over 48 hours and I had 2 hours sleep and this went on for a few days.

Ryan’s family came in the next day, they had tears in their eyes it was so beautiful. I was quite sore and uncomfortable from the stitches (I had 2nd degree tears) and also so scared to pee but it wasn’t nearly as bad as I thought it would be. The icepacks the hospital had for down there were a blessing (I ended up stealing half the freezer to take home ) and Panadol seemed to help a lot too. Little H was a breeze to look after in hospital she basically slept most of the time and fed every 4 to 5 hours. They tried to give us early discharge the next day as I was doing so well and Little H was super healthy. I didn’t feel comfortable leaving just yet I liked having the midwives there just in case. Bub coughed up a bit of mucous as I pushed her out so fast and this totally scared the shit out of me.
The next night the older midwife was on duty and made comments on how H was overly sleepy and her eyes didn’t look focused along with all this other garbage. The old bat also pushed H’s belly around and made her cry…and me. Everything ended up being perfect of course. So that night I also only got an hours sleep as I was stressed about what the midwife had said and H was also coughing up more mucous. She also kept making me wake up her to feed her every 2 hours even though the poor little thing was full. I spent most that night on the phone to Ryan and mum crying.

The next day was finally home time! I was so excited to be taking my baby home and Ryan was stoked also. He even made me an amazing deli meat and cheese platter of all the things I couldn’t eat whilst pregnant. It tasted bloody amazing but unfortunately I didn’t have much of an appetite. I was shocked at how quickly my body was already bouncing back, I was lucky to get only 2 tiny stretch marks on my hips and that was it. It felt so odd not having a belly anymore but I loved being able to move around freely. I got alot of phantom kicks and kind of missed having H part of me.
I packed my hospital bags popped H in her capsule (which looked ridiculous because she was so tiny) and off we went. It was sooo thrilling to be taking our baby home but also scary at the same time. I assumed H would be the same as she was in hospital and just eat and sleep but I was so very wrong. Our first night home was hell, she wouldn’t settle and fed every 2 hours, which for her was very different. I was like thinking “what the fuck is going on”. 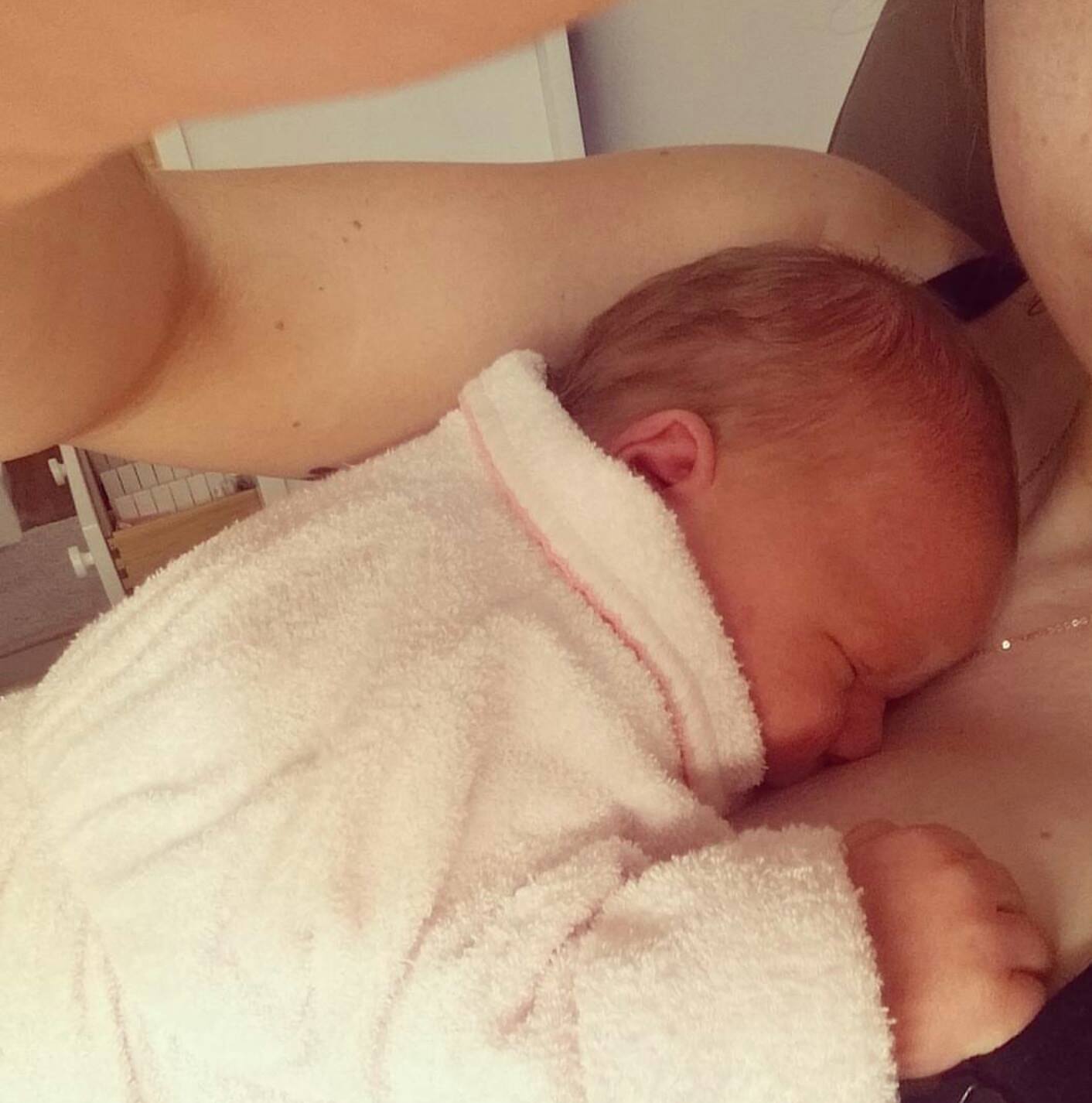 The next couple of weeks I was the walking dead, running on 3 hours broken sleep a night and then having to entertain visitors. Those weeks were VERY VERY hard. Ryan was my rock throughout the hard times always supporting me, bringing me water whilst I fed and changing her nappies. I really think a baby can either make or break a couple and honestly we became the best team, we worked together so well and never got angry or mad at each other. Ryan really is a natural father, he was so confident straight away and I just let him learn his own ways of doing things (along with a couple of pointers). In no time he was a pro and I could trust him to watch her while I could go have a shower or just lay down for an hour or so.
The lack of sleep during these times really is a killer. I didn’t know people could function on such little sleep. Babies feed every couple hours throughout the day and night, this means you get an hour or so to sleep, then baby wakes for feed, you feed and resettle which takes at least another hour and by the time you fall asleep its nearly time for the next feed (and don’t get me started on bloody clusterfeeding). As much as it is incredible once the utter exhaustion hits it can be very hard to cope. I was lucky that breastfeeding was a breeze at this point, my supply was amazing and H had such a great latch. It took a bit to get used to leaking all over my clothes, on H, on the couch and having nipple pads hanging out everywhere. My boobs were out so much they became part of the furniture (not that Ryan minded).

Then when H was 9 days old we went to do her newborn shoot, I was standing there posing for the camera and then I felt a large gush of blood…

Next Part: The Aftermath

Can Mama’s REALLY do it all?

Yep I am having one of 'those' days. You know those days when you wake…

Copyright © 2020 Steph Pase Just Another Mummy Blog
Back To Top
×